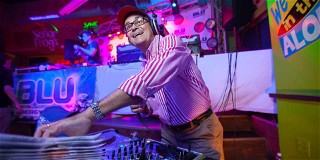 (Editor’s note - If you haven’t been there yet, the SCCA Official – Members group on Facebook is a great place for helpful hints, Club comradery and a chance to meet new members. Aashish Vemulapalli introduced us to his friend John D’Angelo, and we’re glad he did!)

If I told you that someone is a DJ, active on social media, and an active autocrosser as well as Time Trialer supported by sponsors, you’re bound to think it’s someone young, right. Let’s shatter that stereotype.

Meet John D’Angelo who’s been a club member for over 38 years and has the heart of a young person. We were Facebook friends before we talked to each other in person. I was sitting around moping over data in the pavilion at NCM, when he walks over and asked how I was doing. When I said I wasn’t too thrilled he motivated me by saying “there are guys out there in V8 cars that are running slower than you”. We struck up a conversation then and it keeps going to this day (6 months after we first spoke).

He got his racing license at Road Atlanta in 1977 and raced showroom stock. He was a divisional champion (HP) and even made the runoffs in 1989 where he finished 10th in class. He also raced the GS class in IMSA and was on the grid with Andy Pilgrim at certain races. He said that during his early days he was barely making ends meet and would sleep in tents or in his car at the racetrack. As he grew in broadcasting, he found sponsor support and learned skills that he employs to this day to find and keep sponsor support.

He took a break from the action, to raise a family and worked for Saudi Aramco in Dhahran for nearly two decades. His children had no idea of his racing past. He gives credit to the SCCA for sending him the SportsCar magazine every month even while he was overseas and recalls them even sending him a 30th anniversary hat.

Once he was back home, he came across an autocross event and that reignited his love for racing. And once the Time Trials program started, he found a way to get back on track, only this time he was racing against the clock and not wheel-to-wheel. He won the Holley Performance Award at the 2019 Time Trials Nationals for Most Improved Ford and you could tell he was as enthusiastic about his trophy as his fellow (younger) participants were.

I affectionately call him ‘Papa John’, and to his credit, he hasn’t called me a young whipper-snapper. This season he plans to attend the Road Atlanta Time Trials event as well as the July 4th Big Bang at Thompson Speedway. I’ve no doubt that he will also trace his path back to NCM again. He’s also on the Board of Directors for the SCR SCCA and a Street Survival Coach. How he finds time to do all this and also create music, and keep his sponsors engaged is something I’ll never understand.

He’s one of the nice people you’ll come across at SCCA Time Trials events and chances are he’ll strike up a conversation with you, and make you feel like you belong. In short if had to paint him in broad brush strokes, I’d say he’s an ‘OK’ boomer.