Le Vey, Bordeaux Run Ahead of the Competition in iRacing Series 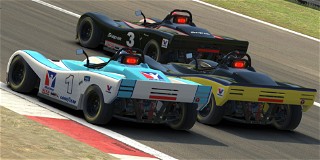 Just passing the halfway mark of the season, front runners Zachary Le Vey and Tommy Bordeaux have created a nice cushion from John Young, who holds the number three spot, in the SCCA Spec Racer Ford Challenge Presented by Ship Barber Racing School. With a 280-point difference from second to third place, Tommy Bordeaux can focus on attacking the number one spot, which is held by Le Vey with 759 points. These two are not unfamiliar faces to each other, as they have been battling it out all season thus far to be king of the hill.

Similar to last week, an 80-point gap separates positions seven through eleven, demanding speedy racing from racers Zachary Rivard and Jeffery Minor, in seventh and eighth respectively, if they want to stay at the top of that battle. Do not be surprised if we have some major mix-ups next week as a good portion of drivers are in prime positions to make a move, such as Brett Holton who currently resides in fifth place, but is trailing by only 11 points to fourth place holder Dustin Decker!

Want to get involved in the SCCA Spec Racer Ford Challenge iRacing series presented by the Skip Barber Racing School? Click here to sign up today! New to iRacing and want to get your rig started? Check out this article on how to get started into the fast action world of sim racing, including everything from a computer spec startup guide to physically getting your sim rig ready to go! With no greasy hands and maintenance bills, online simulator racing programs such as iRacing.com offer hours of unlimited practice with a broad spectrum of to-scale tracks and cars to get you moving fast!